It would take one person about a year to look at all the artworks in display in the Louvre at a leisurely pace, all 35,000 of them. In fact, if you look at each artwork for only 3 seconds (like seriously straight-up marathon-veiweing of all pieces with no breaks), you will finish seeing all of them in 3 months. It’s virtually impossible. You’ll end up in a coma. But I’m getting ahead of myself…

Anyone with even the slightest interest in art has heard of the Louvre. I mean how can you not? It was like the coolest place to go after Dan Brown’s Da Vinci Code came out. The former palace of the Kings of France, the Musée de Louvre became a national museum after the French Revolution with the royal private collection being opened to the public. The Louvre has got over one million works of art from ancient ancient civilisations, Islamic art and Western art from the Middle Ages up to 1848.

Another famous thing about the Louvre is the Pyramid, the museum’s most recent addition. Built in 1989 by the renowned American architect I.M. Pei, the glass pyramid functions as the main entrance and also provides natural light to the underground floors below. It’s become one of Paris’ landmarks, almost as famous as the Eiffel Tower. Dan Brown’s Holy Grail was buried right under this pyramid. Not the most reliable reference…

The Museum’s works are spread out into 3 massive wings: the Denon Wing, Sully Wing and the Richelieu Wing. I was only able to explore the Denon Wing and some parts of the Sully Wing (thanks to getting lost) because seriously, touring the Louvre is exhausting – it wears you out physically and mentally. Oh yeah, did I mention there were hoards of people at the Louvre? Yes. Thousands. It’s not a walk in the park, let me tell you. To ease your visit, here’s a list.

How to Survive the Louvre: What to Do, Where to Go, What in the World is That?

Before we get to the actual artworks, my tip is pace yourself. Don’t schedule any other excursion on the same day you’re visiting the Louvre. It’s massive. There will be walking. Crowds everywhere. Follow my advice if you want to stay sane. Oh yeah, the entrance ticket is 12 Euro per person.

Yes there must be a route. Take note of what you want to see, plot it out on the map and you’re on your way to an enjoyable art excursion that won’t kill you. Get a Map at the Info Desk. You can download the App on your Smart Phone or rent an Audio Guide for a couple more euros.

There will always be a line. Just wait in line and you’ll get in eventually. We lined up after lunch at around noon at the Pyramid entrance and we waited for less than half an hour. Not too bad.

• Denon Wing – the most crowded, contains all the famous masterpieces, must visit. If you’re not a hardcore art student, this is the place to go. All the classics and greats are over here. The Mona Lisa is the star attraction.

• Richelieu Wing – lots of works from the Middle Ages up to the 19th Century. The most popular artwork in this wing is the Code of Hammurabi, the Babylonian law code from 18th Century BC. Eye for an eye, tooth for a tooth and all that. I didn’t venture into this wing anymore. Next time…

• Sully Wing – the oldest part of the Louvre with antiquities from Ancient Egypt. Over here you can also find one of the museum’s highlights – the Venus de Milo.

Here are some handy maps to help you find your way around. Click to enlarge. 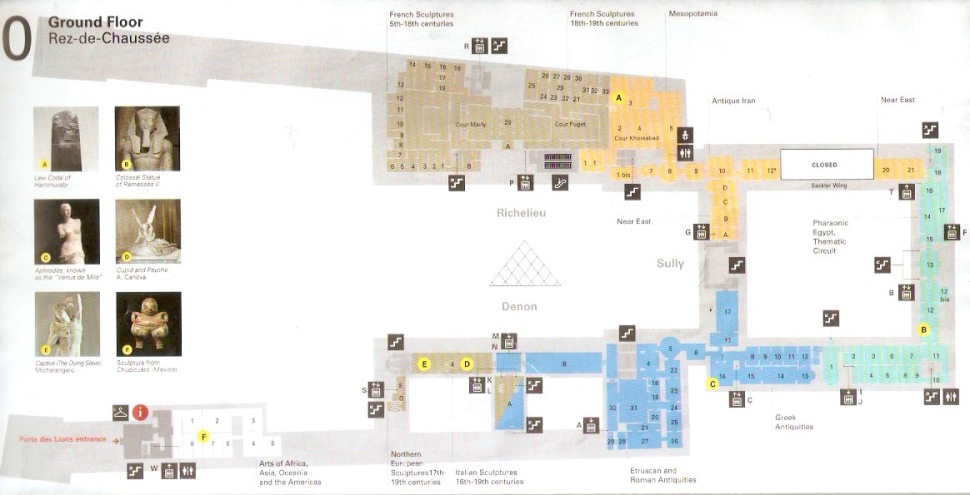 According to John Lichfield (The Moving of the Mona Lisa), Leonardo da Vinci’s Mona Lisa is “the best known, the most visited, the most written about, the most sung about, the most parodied work of art in the world”.  It is displayed in a purpose-built, climate-controlled enclosure behind bulletproof glass. It’s more than 500 years old. With the hundreds of people crowding around it, you would think Michael Jackson (Thriller era) was back from the dead.

Do you know how difficult it is to take a decent photo of the Mona Lisa? Very. I had to elbow my way through hoards of tourists to get to the very front of the barricade. I extended my phone over the ropes just to get a close up. The guards weren’t too happy with my sheepish apologetic smile. The effort was worth it. Why? Because the Mona Lisa is tiny. It’s only 77 cm × 53 cm (30 in × 21 in).

6. The Wedding of Cana

Meanwhile directly across the famous yet small Mona Lisa is the massive Wedding at Cana by Paolo Veronese. It spans one whole wall at a whopping 666 cm × 990 cm (262 in × 390 in). It’s the largest painting in the Louvre. For those familiar with this gospel from John, the painting shows the party where Jesus Christ performed his first miracle of turning water to wine. Jesus got the party started. In the Da Vinci Code, this painting had a starring role.

The Venus de Milo or Aphrodite of Milos is one of the most famous ancient Greek sculpture made around 130 – 100 BC. The marble piece is huge, standing at almost 7 feet. The sculpture was discovered with its arms already missing. Based on Disney’s Hercules, it was Herc who broke the statue’s arms while playing skipping stones. That probably was not accurate haha. So anyway, it is impossible to take a picture of the artwork without other people all over the place. Just my luck, a tour group was there to provide ambient background.

8. The Winged Victory of Samothrace

This 2nd century BC sculpture of the Greek Goddess Nike is one of the world’s most famous artworks. As a diehard Matthew Reilly fan, I had to see what the Winged Victory of Samothrace looked like especially since it was knocked over into pieces in the book. Lo and behold, when I got there, the statue was under restoration.

I have no idea why this is famous. Fun fact, this was supposed to be placed at the tomb of Pope Julius II. Hmm…

A Neoclassical masterpiece with great emotion. I don’t think I saw any other sculpture in the Louvre that’s as magnetic as this one. Also, glad to see cupid as a man and not a diaper-wearing baby shooting arrows. 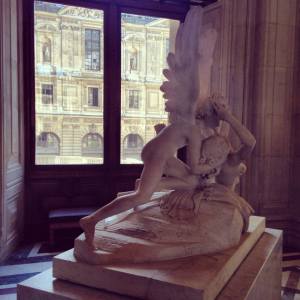 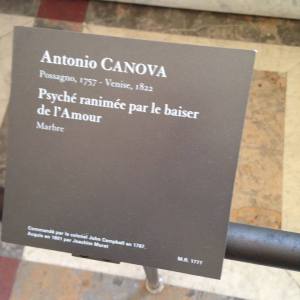 While not exceptionally great or in any way as famous as the other works in the Denon Wing, this painting drew me because of something I read by the amazing Ben Thompson in his website badassoftheweek. The story changed my life and the way I looked at writing history and facts forever. In this story, the badass in question was none other than the Archangel Michael who “Layeth the Almighty Smacketh Down”. This painting was used as a reference in this epic retelling. Here’s an excerpt of when Lucifer busts through the pearly gates and everyone goes apeshit…

“But instead of handing over St. Peter’s keys like some kind of two-dollar pussy carjacking victim, God takes one look at this thing and is just like, “Mike, show this fucking douchebag the door”.  The Archangel Michael calmly nods his head, slowly takes the cigarette out of his mouth and flicks it onto the floor, cracks his knuckles and confidently strides towards Lucifer.

Michael doesn’t just whip Lucifer’s ass, he completely fucking humiliates him by slamming him face-first to the turf and then stepping on his head for no reason other than to be a jackass.  I mean, Michael has huge-ass wings so he doesn’t even need to set foot on the ground for any reason, but he’s badass enough to know that when you’re jacking the Prince of Darkness’ shit up royally for fucking with your boss, you might as well get your digs in there and add to the humiliation of his defeat.  In case you didn’t notice, Michael’s not even breaking a sweat here either.  He’s just that hardcore.”

12. The Great Sphinx of Tanis

Ain’t no way I’m leaving the Louvre without seeing some ancient Egyptians. This statue is as close as I can get to Exodus, Ramses-Let-My-People-Go feels. This humongous statue dates back to 2,600 BC.

I didn’t take much pictures, the medieval remnants of the old palace down in the basement was pretty cool too but no sweat, I could always go back. So in conclusion, don’t miss out on the Louvre. It’s an explosive, brain-melting experience. It’s awesome.

But first, let me take a selfie…