“Vienna wasn’t just a city, it was a tone that either one carries forever in one’s soul or one does not.” – Sándor Márai, Embers

Ah Vienna, such pomp and class. You regard yourself with such high favor. And why not? Nothing is small nor simple in this baroque city. Everything is just too much.

Arrival wasn’t so grandoise. Took a Germanwings Flight from Berlin to Vienna and from the Airport took the Bus to the Westbanhof. My MotelOne was right beside one of the city’s main train stations. How convenient is that? Cheap foodcourt and convenience stores open 24/7! I have to say, this mid-range hotel chain is easily becoming one of my favourites. 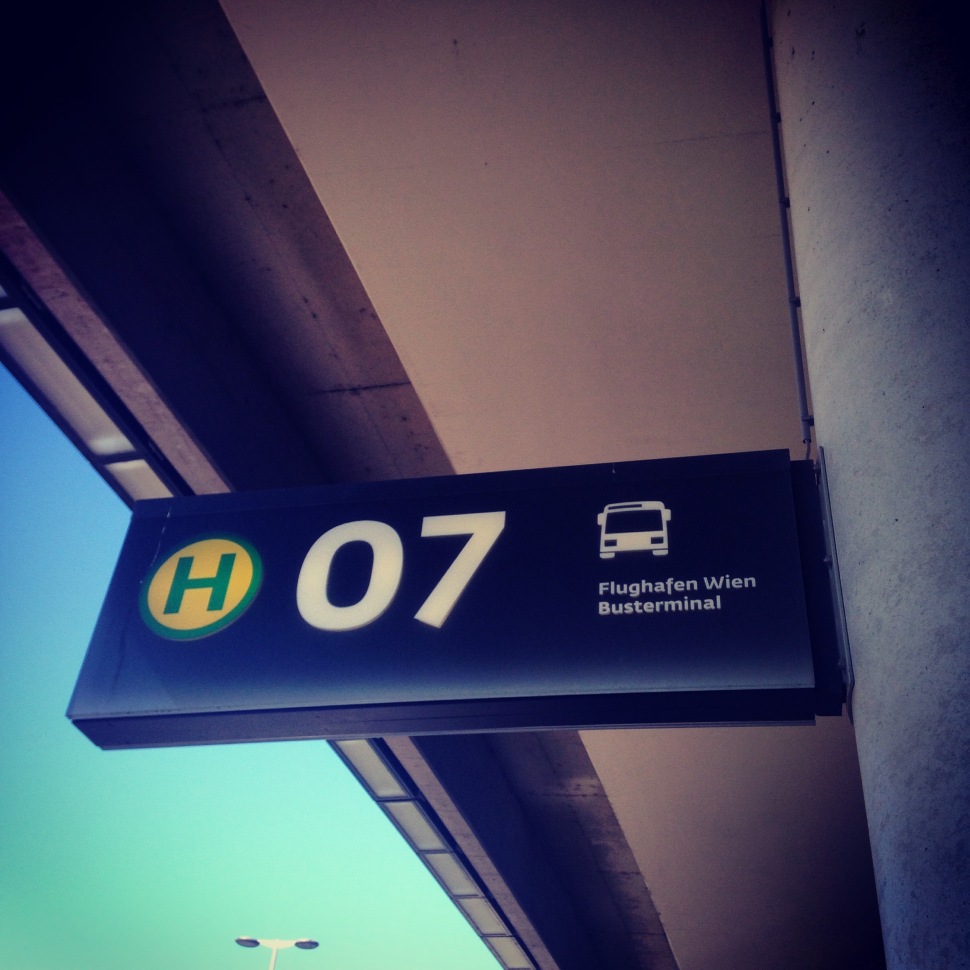 First stop in Vienna was the Grand Palace and Gardens of Schloss Schönbrunn, home of the Hapsburg Monarchs and UNESCO World Heritage Site. This was actually Marie Antoinette’s childhood home before she was shipped of to France to marry Louis XVI.

The palace had 1,441 rooms that are a mix of changing interests and tastes of the Hapsburgs over a span of 300 years. It was massive. Like seriously, with long corridors and huge rooms. To think, I took the Quick Tour. My short attention span could not handle the detailed hours-long tour. Pictures weren’t allowed during the tour. There was a huge floor to ceiling painting of one party in the palace where Mozart as a child sat on the Empress Elizabeth’s lap and just wowed everyone with his talent. One thing’s for sure, palace life is not for me. Good thing I’m just part of the masses.

The gardens are also overwhelming. Overwhelmingly exhausting but beautiful. There were roses and hedges and landscaped patches of green as far as the eye can see. After a long walk, you reach the Sun Fountain or Neptune Fountain that is so inviting, you wanna dive in to escape the heat. Just my luck, it was a hot day. Beyond the hill, you can find the Gloriette. 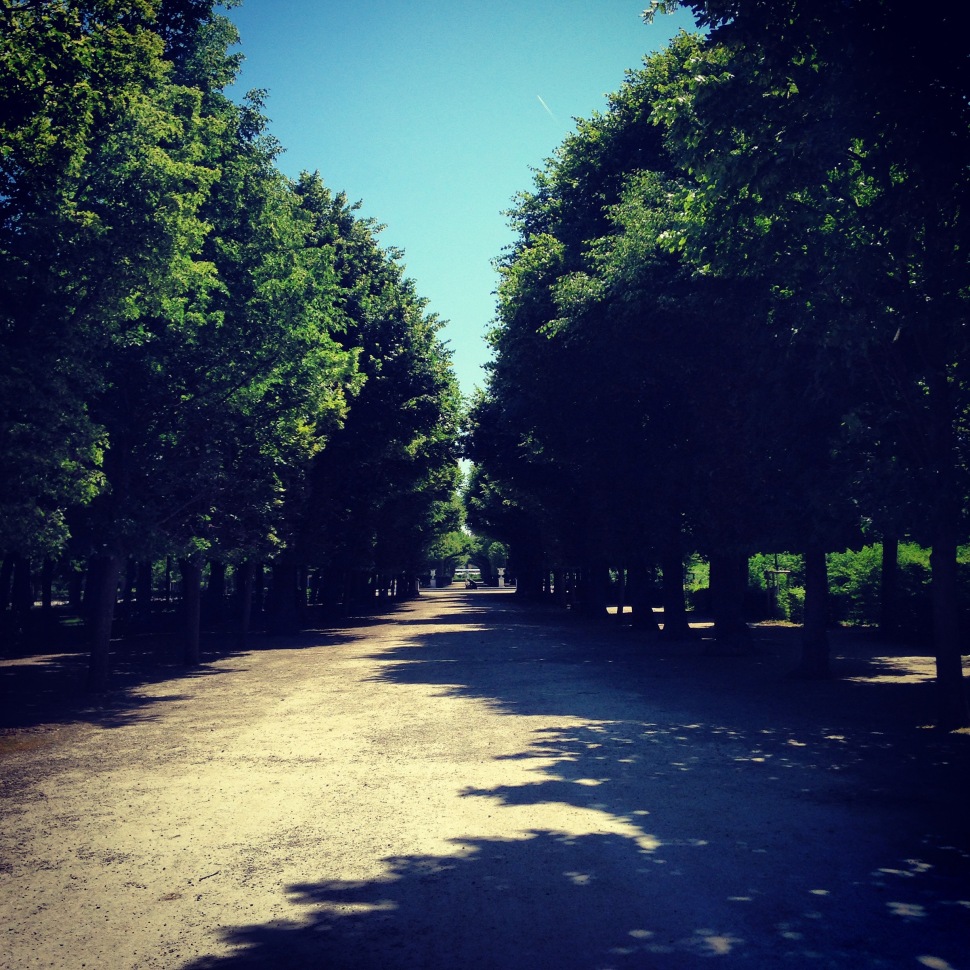 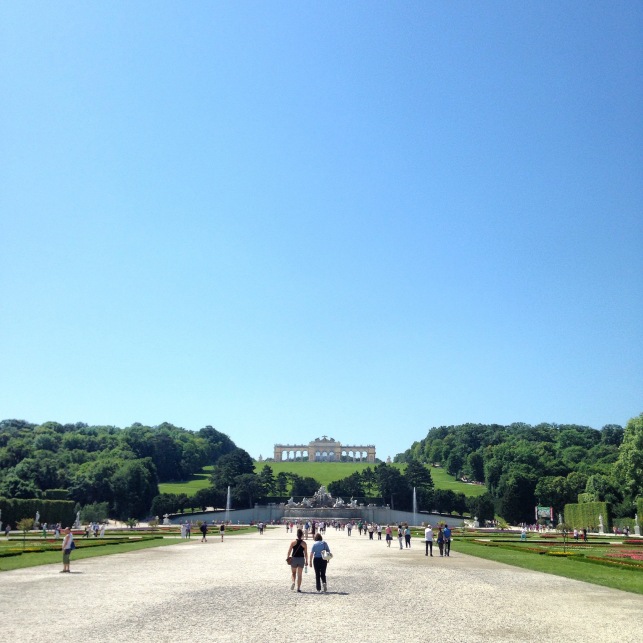 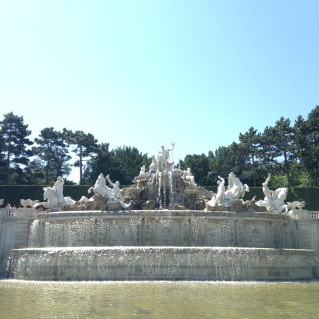 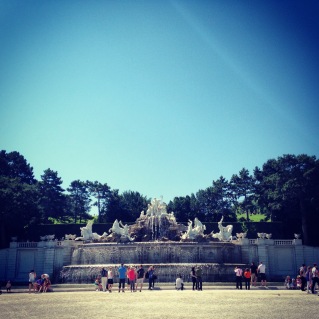 Next up on the itinerary was a stroll around Stephansplatz, the central square of Vienna, named after it’s most prominent building – the Stephansdom or St. Stephan’s Cathedral. It’s actually one of the tallest churches in the world. The inside is just beautiful, one of my favourite church interiors actually. 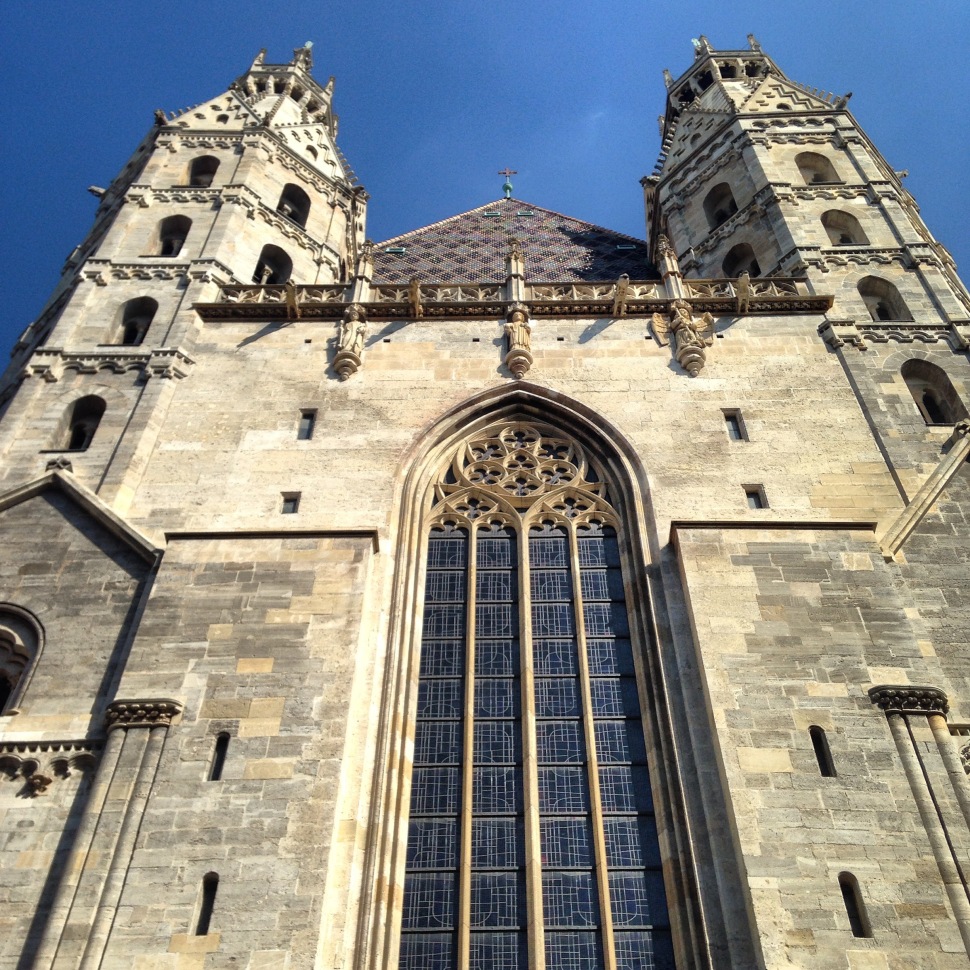 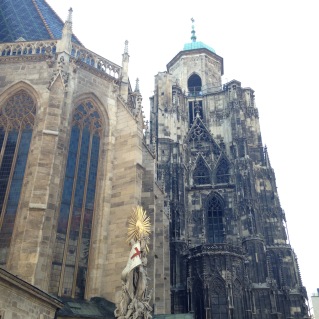 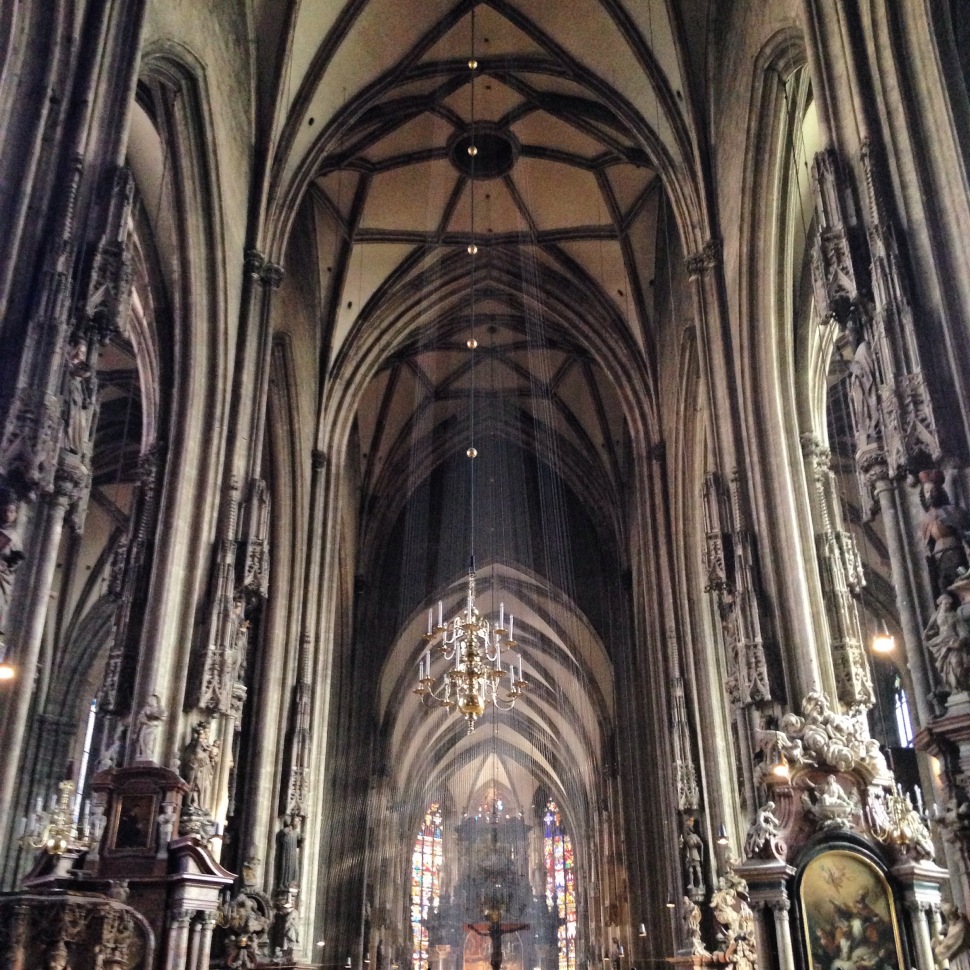 There was some sort of market/ food festival going on around the church grounds. It was such a cool experience buying local stuff, checking out local art and trying local street food. My favourite shop was this candle maker with colorful candles in all types of shapes and sizes. I ended up buying a plain black one. Yup, boring. 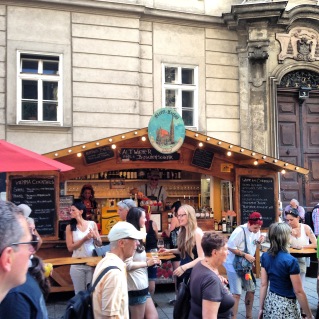 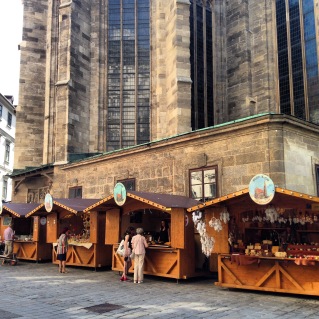 As the birthplace of Classical Music, it would be an obvious choice to watch a symphony orchestra or visit the house of Mozart right? Well, I did neither. I’m more of a Vivaldi fan. I did pass by Mozarthaus and took a picture. It was closed that day.

Walked around the Graben, the city’s most famous street,  for a bit to just take in the hoards of people. Vienna’s old buildings turned into restaurants and shops are just so beautiful. Of course I was super happy to spot my favourite store inside an old 3-storey building. The classiest H&M I’ve ever been to.

One thing that was pretty amazing and annoying at the same time was the snooty waitstaff in every restaurant. Did you know that you should never, ever call on a waiter? You wait for them to approach you if and when they feel like it. Also, they do not like tourists swarming their establishment. Okay! Well good thing I wasn’t starving and didn’t have to wait long. After living on random fast food stalls in the Banhof, I finally stepped in a posh Viennese restaurant just to try the famous Wiener Schnitzel. Opted for Cafe Prückel, a very classic old-school Austrian place where the waiters were decked out in black tie and the furniture was really retro. The Wiener Schniztel, a huge slab of breaded pork loin was as tasty as paper. I doused it with so much salt, ketchup and pepper that I couldn’t distinguish the taste anymore. I think being Southeast Asian spoils me for any kind of dish. Everything else is just so bland. Thankfully, the Radler was cold. 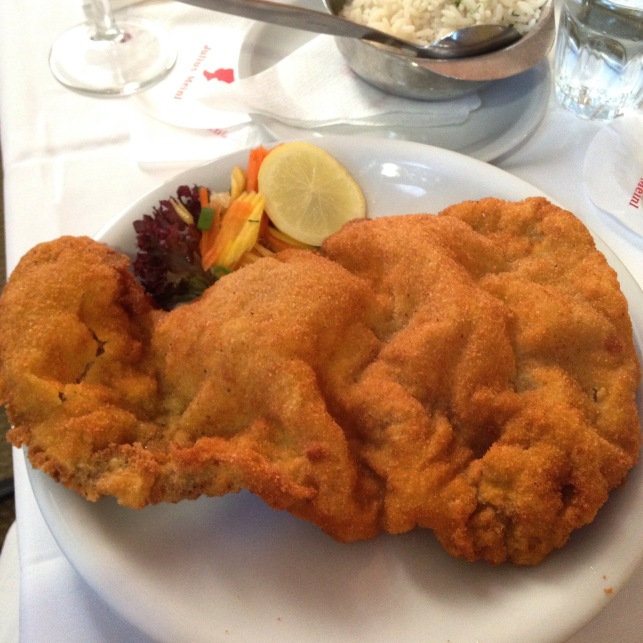 Another of Vienna’s must-try is the famous Sachertorte, the city’s specialty dessert. While ducking into the snazzy Landtmann Patisserie for some Eiskaffee, I decided to try this famous cake but after learning that it was made of chocolate and apricot jam, I decided to have a slice of the Trüffel Torte instead because Chocolate Truffles. I had to wait for the waiter to finally approach me but the Café was really nice to hang out in. 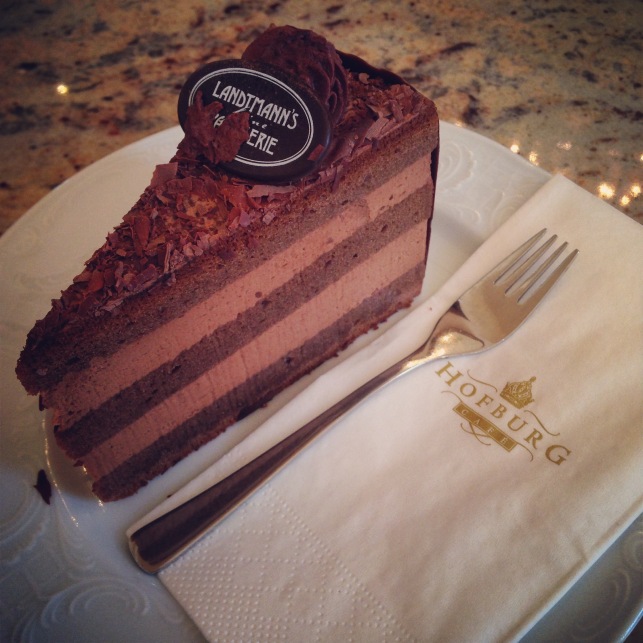 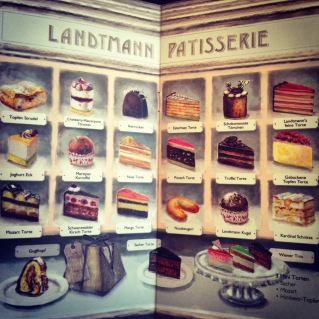 After the coffee and cake break, I continued on just walking around the city, seeing where my feet would take me. I ended up in the Hofburg, which is like the Imperial Palace and Apartments of Vienna. Around this complex is the National Library, the Spanish Riding School, and the Sisi Museum among others. Interesting note, the Empress Elisabeth (Marie Antoinette’s mom) was and still is such a cult figure that she has a museum dedicated to her life. 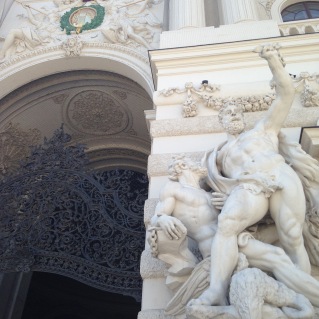 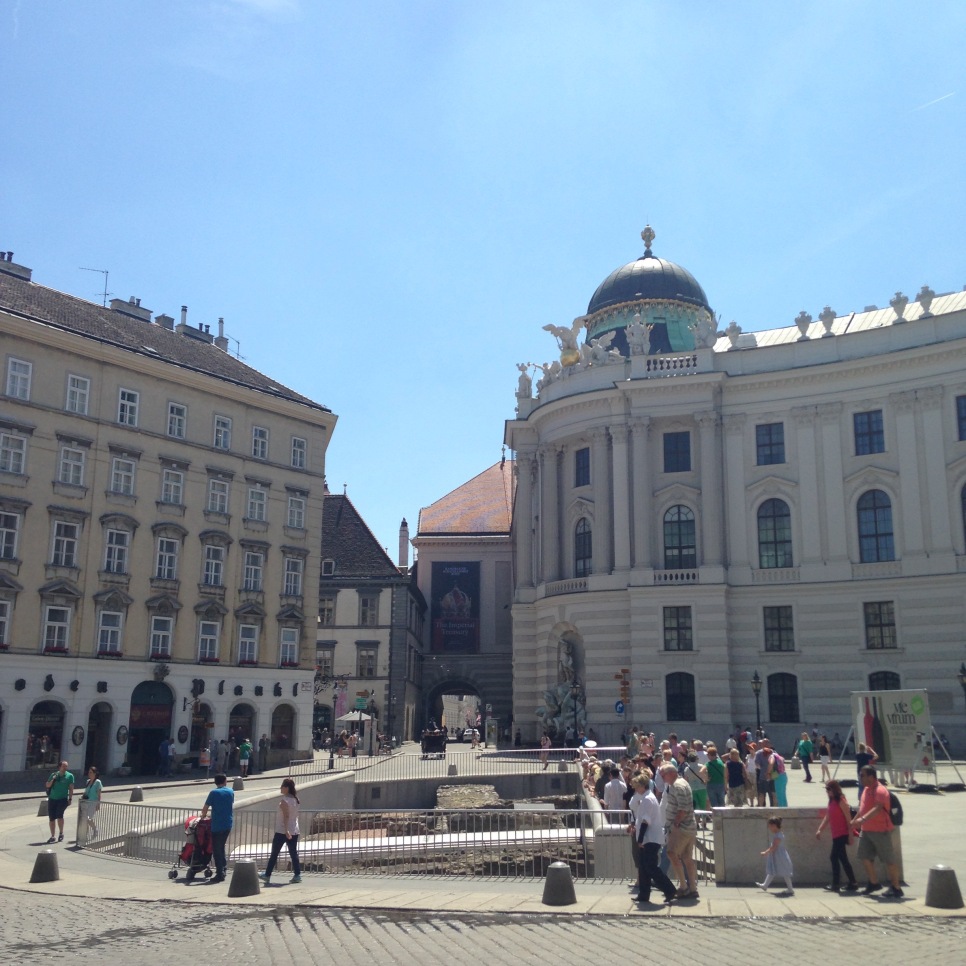 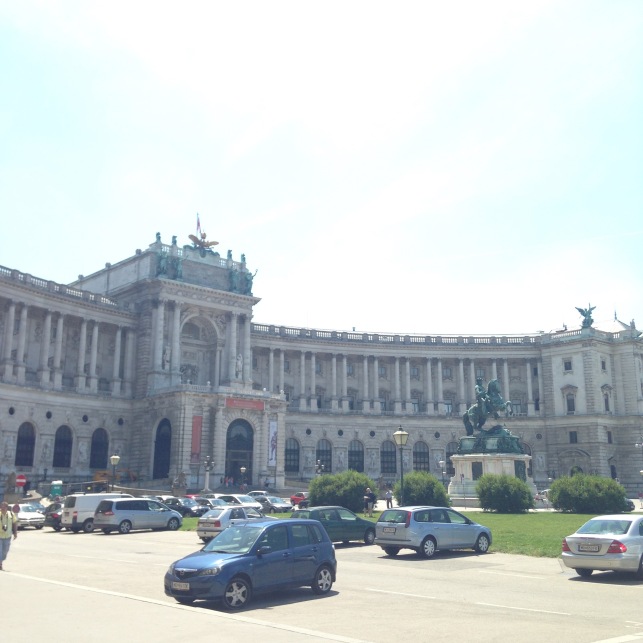 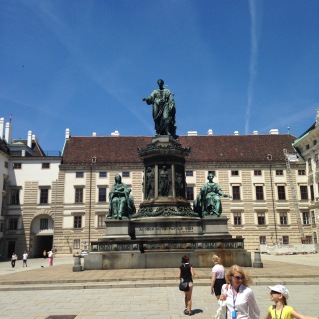 Took a train to see the Danube River, Europe’s Second-Longest River. I really don’t know anything about the Danube except for the waltz by Johann Strauss. It was indeed blue. 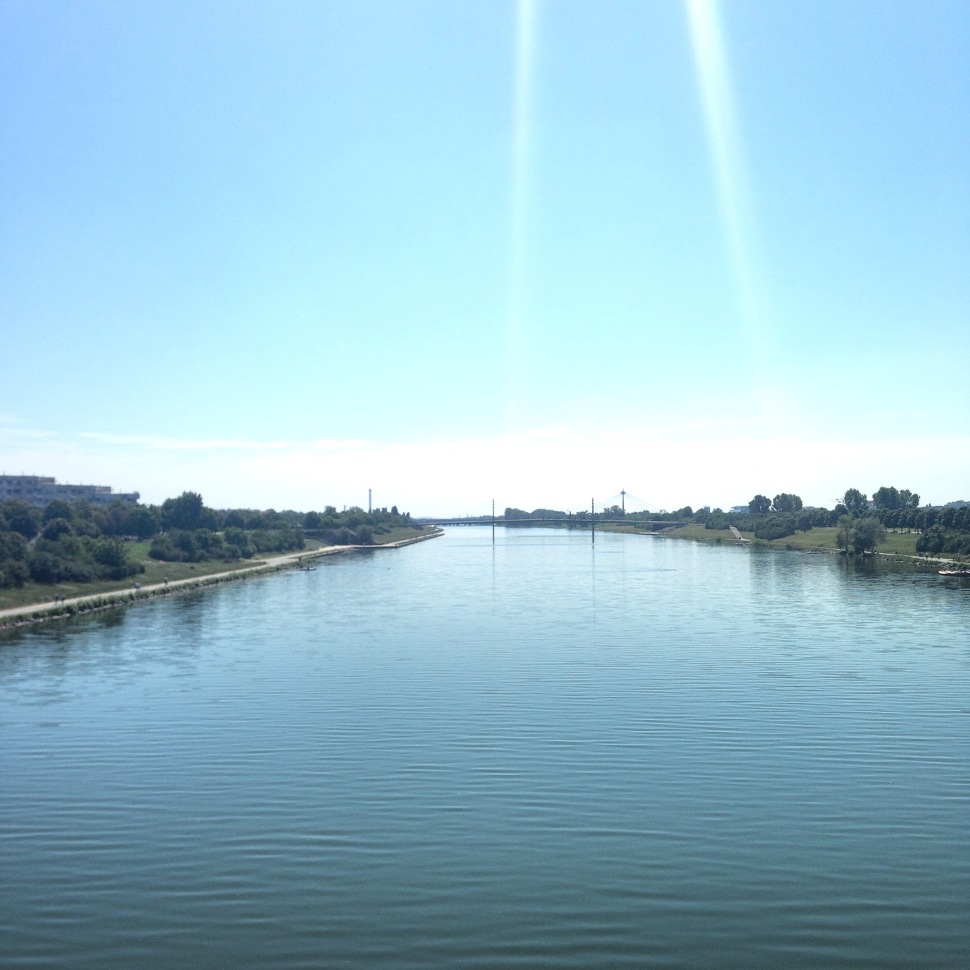 One of the highlights of my Vienna visit was definitely the Hundertwasser House. Designed by Friedensreich Hundertwasser, this quirky, whimsical architectural gem looks like it popped out from the pages of a Dr. Seuss book. Mismatched tiles, crazy shapes and bright colors. I want to live here!

“It features undulating floors (“an uneven floor is a melody to the feet”), a roof covered with earth and grass, and large trees growing from inside the rooms, with limbs extending from windows.”- www.wien-vienna.com 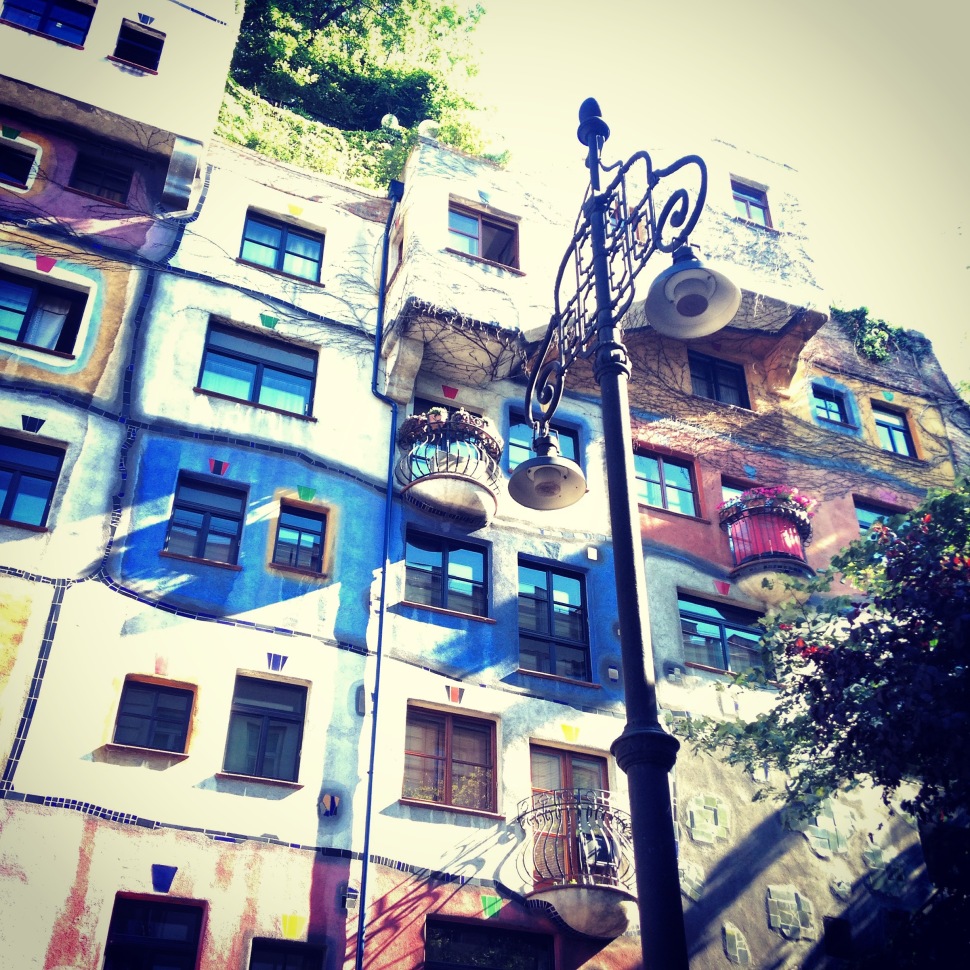 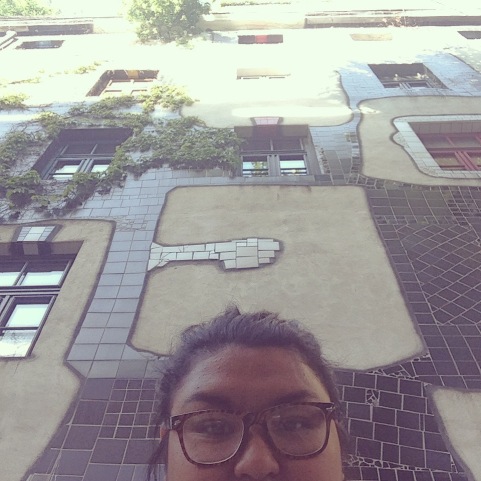 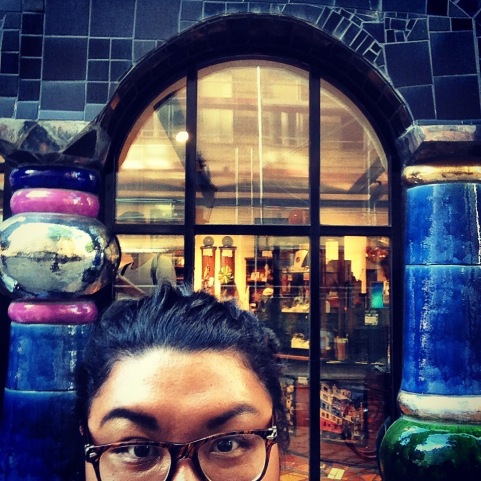 While walking from the train station to Hundertwasser Haus, I spotted the coolest thing ever – SPACE INVADER!!! I was super excited to spot one of the famous mosaics on the street. *Claps hands 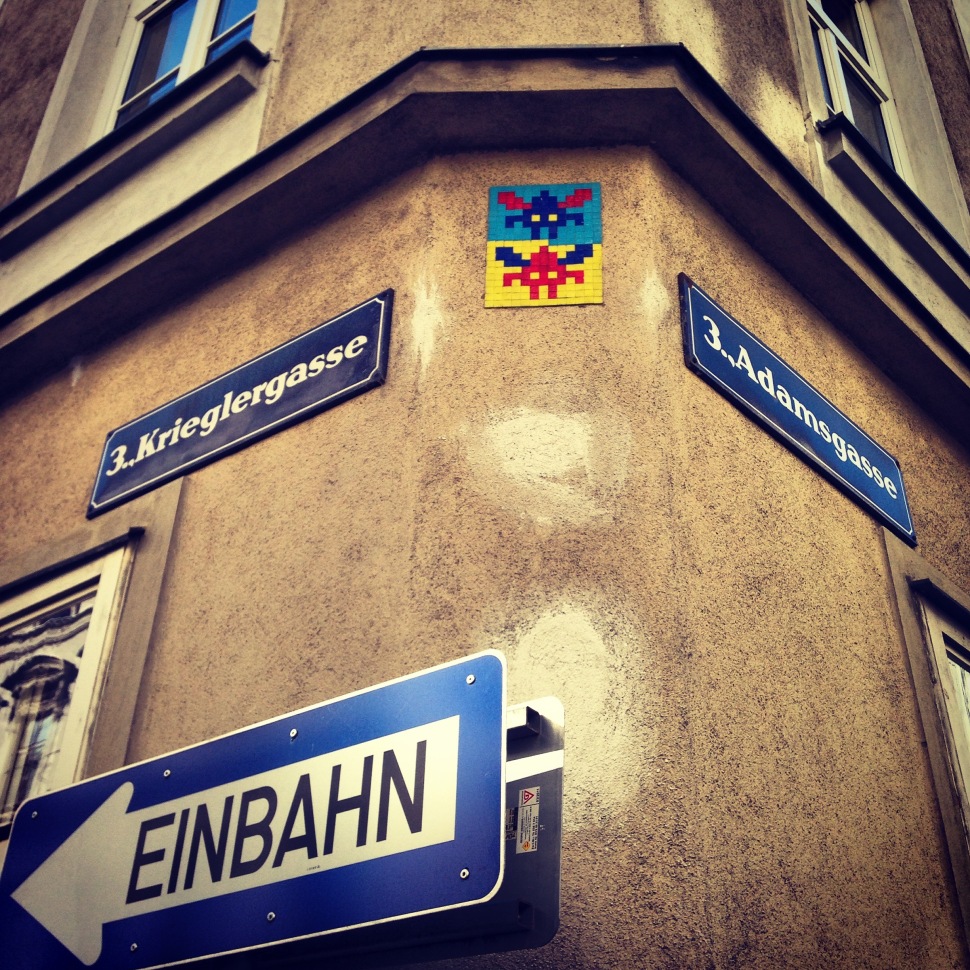 I also made sure to head over to the Museumsquartier (MQ) which is considered as one of the world’s largest cultural areas. It’s home to large art museums and exhibition spaces. After staring at all the Baroque buildings, the MUMOK (Museum of Modern Art Ludwig Foundation Vienna) was such an awesome sight. 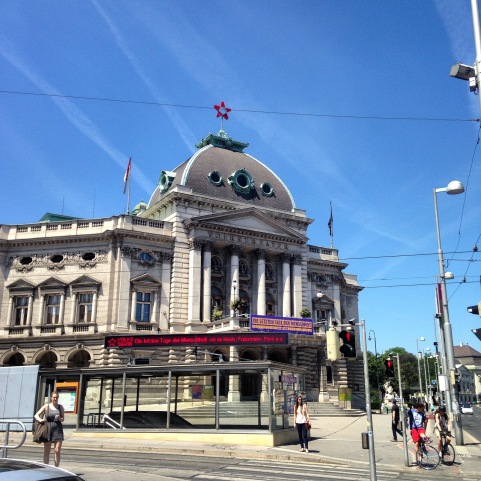 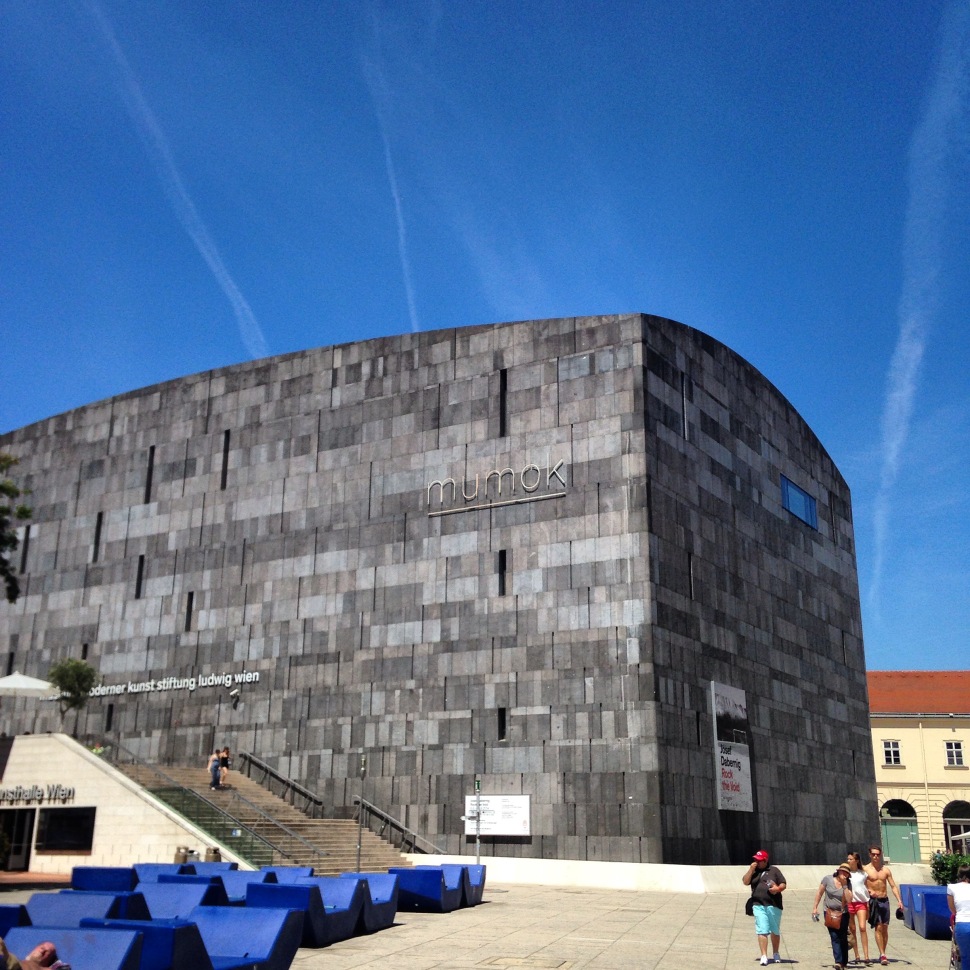 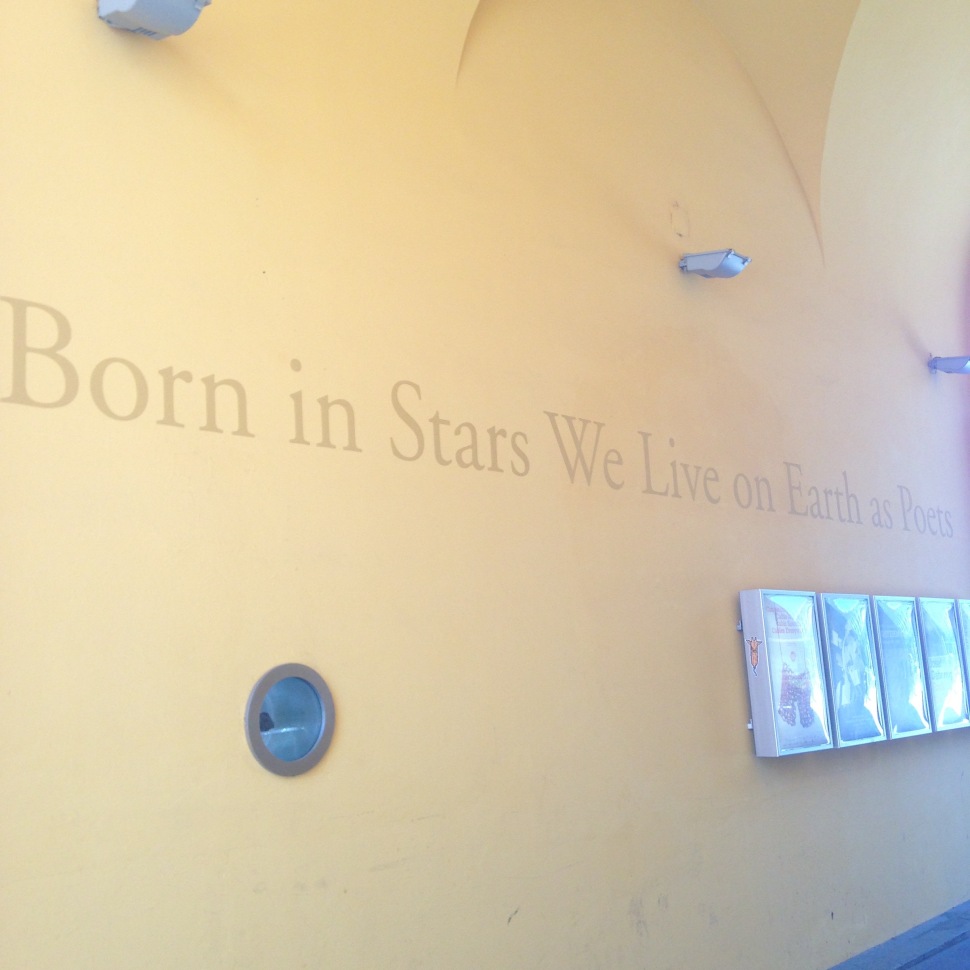 My 5 days in Vienna felt like almost a month. There was just so many things to see and do but I didn’t do much except walk around and get lost. When asked why I didn’t do the Vienna bucket list. Well…Salzburg? Don’t like Sound of Music. Spanish Riding School? Not interested in horses. More museums? I’m just about Museumed-Out.